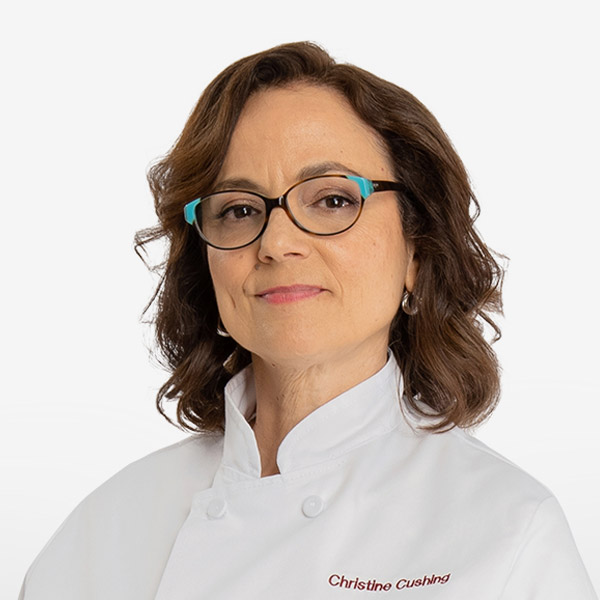 The only Canadian chef to host a live-to-air program with 300 hours of programming, developing over 1000 recipes for TV. Her YouTube Channel has over 250,000  subscribers!

As the host of Food Network’s extraordinarily successful daily flagship series, Christine Cushing Live, success has followed her with all she has done. Currently she is part of Food Network’s Wall of Bakers (2022) and was part of Wall of Chefs (2 seasons).

She traveled the world filming her Taste Award winning show Confucius Was a Foodie (PBS, Nat Geo in Asia), an exciting doc series for 3 seasons. She tied with Chef Gordon Ramsay for the Taste Award “Best Chef” with 4 other wins for her show including Best Food Travel Series.

Born in Athens, Greece, Christine immigrated to Canada with her family at the age of one.

After completing the Food and Beverage Management Program at George Brown College, Christine went on to graduate at the top of her class at the Paris based École de Cuisine La Varenne. That year forever changed her philosophy of food and made her drive even harder to follow a career in the culinary arts. She has worked in such renowned kitchens as Toronto’s The Four Seasons Hotel, King Ranch Health Spa and Scaramouche Restaurant.

She was the spokesperson for Cook for the Cure Breast Cancer campaign and a superhero for the Starbright foundation for Sick Kids hospital and currently a judge for the Gold Medal Plate annual fundraiser for the Olympic Committee as well as a committed advocate of the Children’s Breakfast Clubs. She has published three best-selling cookbooks, Dish it Out, Fearless in the Kitchen, and her third called Pure Food won a Gourmand world cookbook award in Spain (Whitecap 2007).

Christine’s artisan product line is a culmination of many years of planning, tasting, researching and determination. At the root of her line is a hugely popular series of sauces hand-made from Christine’s personal recipe in Toronto. Find them in stores across Canada.

Her most recent spokesperson role (March 2020) was with the Turkey Board of Canada.

“Christine’s culinary philosophy is simple: Start with the best ingredients, have fun and share everything you know about food.”

READ MORE: Things you need to know about Christine

April 15, 2020: Christine was featured in The Kit. Click here to check it out:  https://thekit.ca/life/culture-life/christine-cushing-spaghetti-aglio-e-olio/

Working with Christine Cushing was an exceptionally positive experience in all aspects. Not only is she an incredibly talented chef, but she was a consummate professional throughout our entire partnership and was flexible and accommodating despite the world throwing us for a loop with the onset of COVID-19. I am very hopeful that myself and my team will get the chance to work with Christine again going forward.