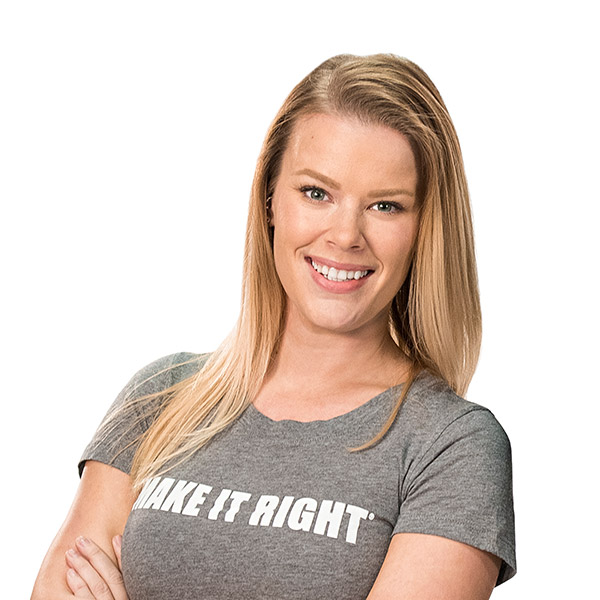 Contractor, TV Host & Part-time Designer. She is the Ambassador for Habitat for Humanity, Build for Women in Canada and a regular speaker at Skills Canada events motivating young people to look at the trades for future career opportunities.

Sherry Holmes is a contractor, TV Host, Part-time designer, and ambassador for women in the skilled trades. Her dad is celebrity contractor Mike Holmes, so construction is in her blood. She started behind the scenes on Mike’s breakout series, Holmes on Homes®, and has been a permanent crew member ever since joining her dad and brother on Holmes in New Orleans.

She’s a co-host on Holmes: Next Generation and Holmes 911 on CTV Life Channel and was part of the “dream team” cast of HGTV’s Home to Win!

Holmes Family Effect is a Holmes’ family affair with her dad, Mike Holmes, and brother, Mike Jr. Airing on CTV and FOX, the show is inspired by people who are making a difference in their communities; each episode the Holmes’ family surprises these deserving people and organizations.

As of December 2021, the latest series, Holmes Family Rescue, delivers more homeowner rescues from shoddy contractors, with a bonus for fans: the 1-hour Christmas special, Holmes for the Holidays on HGTV US.

Sherry continues to be a big supporter of youth who want to get into the trades and continues the family support with Skills Canada and World Skills. She also mentors young women through Conestoga College’s Jill of All Trades and WIST (Women in Skilled Trades). She acts as an Ambassador for Habitat for Humanity’s Annual Women Build Event, a program that calls on women to help build stronger, safer communities.

Through public speaking, media appearances, and her social media influence, Sherry continues to change the face of Canada’s skilled trades workforce, demonstrating that women can bring an entirely new dimension to the construction industry that makes it fundamentally stronger from the ground up.

Sherry and her husband Blake live in Toronto with their two beautiful daughters, Cali & Oaklyn.

Testimonial: Sherry Holmes is an engaging and dynamic speaker and we were lucky to have her as part of the CCWESTT (Canadian Coalition for Women in Engineering, Science, Trades, and Technology) 2020 Speaker Series.  Sherry’s down-to-earth presentation style, combined with her personal stories and sense of humour, made her virtual talk a hit with the audience and left them feeling excited about the opportunities for women in the trades.