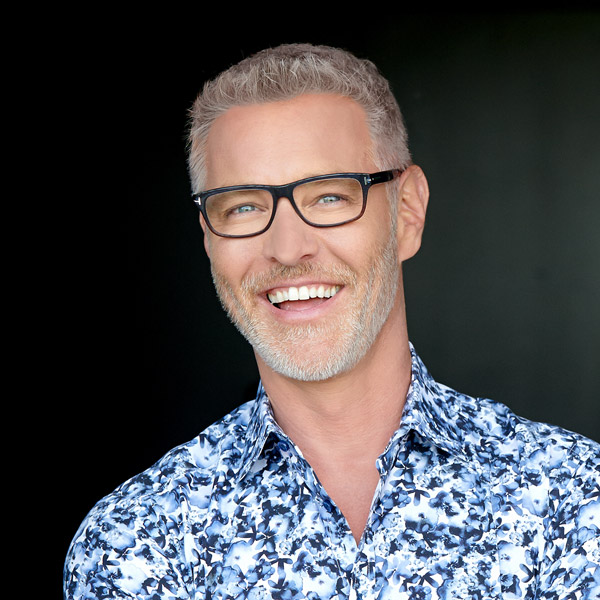 Steven Sabados was born and raised in the Niagara area of Ontario, Canada. From an early age Steven pursued his passion for the arts, finding avenues of expression in painting, photography, architecture and fashion. After completing an education in Fine Art, Steven moved to Toronto where he excelled as the in-store Creative Director for some of Canada’s most successful retail brands including Eaton’s and Roots.

In 1992 he met his partner Christopher Hyndman and together they formed an independent design firm, The Sabados Group. The powerful combination of Steven’s design vision and Chris’ dynamic energy allowed the couple to become HGTV’s top design team (Designer Guys (debuted 2001), Design Rivals (2003)) and to launch their own highly successful product brand, S&C. They hosted Life Network’s So Chic with Steven and Chris (2005) before moving to CBC TV to co-host the national hit show Steven and Chris for several years (2007-2015). Steven also hosted 2 seasons of CBC’s The Goods (2016-2018).

With the tragic loss of Christopher in 2015, Steven retreated from the spotlight to reflect and assess his personal and public future. In 2016 he poured his creative energy into the relaunch of the S&C product line.

Since that time the product brand identity has evolved, and it is now marketed under both Steven Sabados (www.stevensabados.com) as well as the iconic S&C. In 2019 the brand expanded with the introduction of the Steven Sabados STUDIO collection. This highly personal and dynamic product line takes inspiration directly from Steven’s own artwork, sculpture and photography.

Steven is in demand for authentic brand endorsements, public appearances and event hosting. Notably his Friskies campaign and contest (Friskies: Design a Room For You and Your Cat contest) garnered a Shopper Innovation Bronze Award, rejuvenating the Friskies brand with its dry food delivering a growth of 42% and wet food of 5%. Past campaigns include Borderfree Shopping, Hunter Douglas Blinds and Nescafe Coffee-mate.

Steven’s life continues to be shaped by his passion for design, his love of family and friends, and his continuous search for artistic inspiration. Steven will also have a continued presence both on air and through digital media.

In July 2020, CBC (online) featured Steven’s tips for creating a fabulous outdoor space. You can see it here: https://www.cbc.ca/life/video/steven-sabados-fool-proof-tips-for-creating-a-fabulous-outdoor-space-on-any-budget-1.5640781